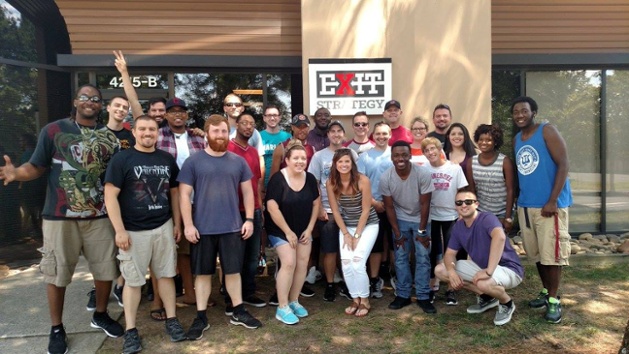 Escape rooms are one of the fastest-growing segments of the booming teambuilding industry. What gives? What makes escape room games so popular among professional teambuilding activities, and why is an exit room the perfect choice for your team?

Here are three reasons escape rooms are the Next Big Thing in teambuilding.

Like it or not, the pressure of a clock lays bare everyone’s abilities. In an escape room, a team has to learn quickly how to work together. Who’s good with numbers? Who’s best at keeping everything organized? And who gravitates to a natural leadership position? Whether you’re a boss or a team member, knowing which attributes the team both enjoys and lacks is valuable information that can be implemented back in the office.

As a manager, HR department, or teambuilding leader, it’s tough coming up with new ideas! Maybe you don’t want to encourage drinking with a team happy hour, or maybe everyone’s not fit enough to run through that paintball course. Escape rooms are as physical as you want them to be, but they’re offsite which is a critical component of pulling people out of their shells. There’s a reason teambuilding events aren’t hosted in the office! The best part is that escape rooms are relatively inexpensive and require very little planning to arrange.

One great element of escape rooms is the equal playing field everyone enters on. One hour is plenty of time for new understandings to form and for employees to run the gamut of emotions together, from laughter to pressure to accomplishment! It’s a natural way to build strong teams out of teams that aren’t obvious, and especially among groups of people who don’t know each other very well. No one leaves an escape room without getting to know their team members – and themselves! – a little better!

Interested in booking an escape room for your next teambuilding activity? Exit Strategy has one of the largest escape game facilities in the country and we love to accommodate corporate groups. With half-a-dozen rooms, there’s something for everyone!

Call our team today at 704-837-0515 to schedule your next teambuilding adventure.