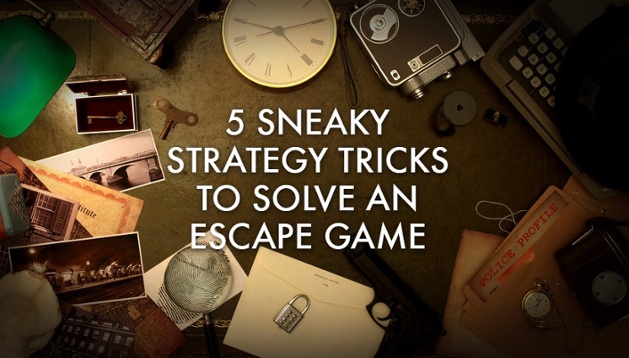 Escape rooms are all the rage. People all over the country are signing up to test their puzzle-solving abilities in themed rooms ranging from space adventures to bank heists! Have you participated in an escape room, or are you thinking about signing up?

If you want to succeed in your escape (and who doesn’t?!), keep these five sneaky tips in mind.

Tip #1: Break into smaller teams.
Most escape rooms don’t just involve one puzzle, they involve many. If your room is full to capacity with anywhere from 8-10 people, you may just have too many cooks in the kitchen! Breaking into smaller groups of 2 or 3 and working on multiple puzzles at once is a smart way to go.

Tip #2: Yell more.
No, really! You should verbalize everything you find (“Here’s a single left shoe!”) so other participants can keep everything in the back of their mind. You never know who’s been sitting on a right shoe the whole time!

Tip #3: Let it go.
It’s a great idea to create a “discard” pile for all the items you’ve already used. In most escape puzzles, an item is only used once – although there are some exceptions to the rule! Keys are almost never used more than once so when you pop a lock open, leave the key there so you won’t get confused.

Tip #4: Ask the master.
Escape rooms are, above all else, designed to be fun! Did you know that if your team is really stuck on a particular element you can actually ask for help? Since the gamemaster’s watching, speaking aloud a, “Hey gamemaster! We need a hint!” can give you the push you need to make it through.

Tip #5: Cover the clock.
For some people, the pressure of a countdown clock is just too much to bear! If that describes your group, try to forget about the clock so you can focus on nothing but the puzzles, at least initially. Letting off some of the pressure might give you a breakthrough.

Remember: No two exit rooms are created equal! Whether you’ve successfully completed a dozen or have never set foot inside an escape game, every new adventure presents new puzzles to solve.

Exit Strategy is the largest escape room facility in the country, and our themed rooms are constantly changing. Book today and try your hand at making a great escape!