“Are Exit Rooms Scary?” Here’s What to Know 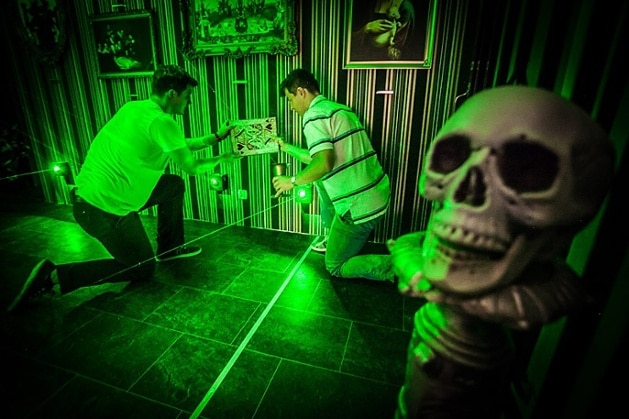 We hear it all the time…

“I’ve thought about doing an escape room…but aren’t they scary? I don’t like scary stuff.”

We’ve got great news! Not all exit rooms are scary. In fact, most are simply FUN, EXCITING, and CHALLENGING!

If you’ve never tried an escape room (often known as “exit rooms” or “clue rooms”) for fear of being scared, you’re in luck. Although some escape room facilities specialize in scary or ‘haunted’ rooms, many – like Exit Strategy – offer a wide variety of themes suitable for many ages.

If you’re looking for a good, old-fashioned scare, you can find it in an escape room. Scary escape rooms are often designed with very dark conditions, and occasionally may use actors to add to the ambiance. When clues are solved (or done incorrectly!) you can count on something spooky to pop out! If the sound of a chainsaw revving doesn’t get you working on that Rubik’s cube faster, nothing will.

Scary stuff isn’t for everyone!
We get it. For as many people who live for horror movies, there are just as many who’d rather play it safe, thank you very much.

At Exit Strategy, plenty of our rooms are far from scary. We offer rooms designed like bank vaults, filled to the brim with clues to help you escape with all the loot. If you’re a history buff, one of our quests might be more up your alley, or perhaps a murder mystery where you’ve got to determine “who dunnit?”

Escape rooms are only as scary as you make them.
Of course, there’s something inherently adrenaline-inducing about being “locked” in a room with a ticking timer. That’s part of the fun! Remember: Beating the clock is its own reward, and no one’s ever stuck in an escape room until the end. We’re always watching your progress and if you get uncomfortable at any point you can easily say, “Get me outta here!”

There’s a reason escape rooms have become so popular as teambuilding events and as family-friendly activities. If they were so scary, HR departments and moms wouldn’t get near them! Remember, you have one of the country’s original escape room spaces right in your Charlotte backyard.
Book your own escape today in one of our most popular themed rooms, scary or not!