Here’s Why You Should Play an Escape Game with Strangers 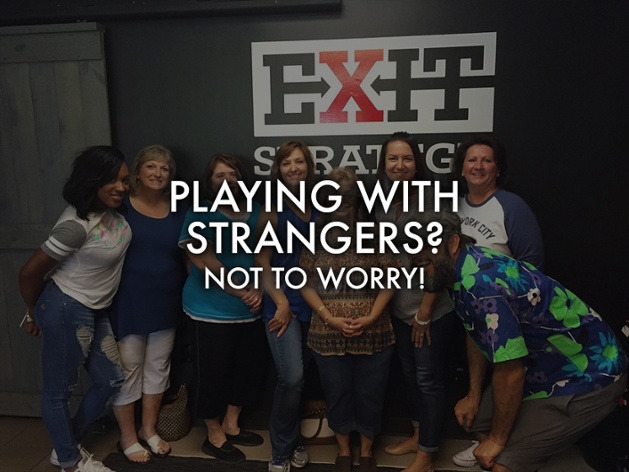 So you want to try an escape game, but you’re just not sure you want to run the risk of playing with strangers? (*Awkward shudder*)

The easiest way to solve that conundrum is to get a group together of 8-10 people, or however many the escape game you want to play accommodates. But, another solution is to open yourself up to the possibility that playing an escape game with strangers can actually be FUN!

Here’s why you should consider playing an escape game with strangers.

Strangers change the whole dynamic. In a good way! Of course you know how you and your three best friends will compliment each other in an exit room, but what about when you add a few others with different opinions, voices, and ways of looking at things? You may find yourself laughing and bonding in ways you hadn’t imagined!

It’s also entirely possible that strangers will improve your game play. Maybe your group is really good at logic puzzles…but there’s a Magic Eye illusion to solve! The more people you have in your escape room the better your odds are of solving the puzzle(s). Strangers – and the skill sets they bring with them – up your chances of making it out in time.

Strangers might also force you to communicate in new ways. If you’re playing a game only with people you know well, you might all be tempted to talk and communicate less. It won’t be as natural to be silent with strangers which will actually help your chances of success! The more you talk and communicate inside an escape room the more information you share, potentially solving puzzles that aren’t as one-dimensional as you might think. Strangers mean more talking!

Remember, escape room game masters take special care to ensure everyone knows to work together as a team, especially if a group is primarily made up of strangers. They also watch game play closely to spot a lack of teamwork, or signs that anyone feels uncomfortable. If you ever feel like others aren’t being as inclusive as you’d like, the game master is listening; simply ask them to intervene. Sharing clues and “playing nice” is part of the escape room experience!

More likely than not, you’ll leave the room surprised by how fast you formed new friendships. Playing an escape game with others is a great way to get to know them quickly, and you may just meet some folks you want to invite out for beers or who go to the same gym you go to! You never know who you’re going to meet inside an escape room; that’s half the fun!

Exit Strategy is Charlotte’s largest escape game facility and we’re experts at creating memories. Come ready to play! We’ve got fun stuff in store for you.